If you’re anything like me, you have a tons of grass where you don’t want it and hardly anything where you DO want it.

Even though we’ve been here 3 years, we still have a pretty poor excuse for a lawn-not for lack of trying on my part. Well it’s not completely my fault- this house was a new construction which meant that all we got when we moved in was a bunch of freshly unearthed clay covered in hydroseed by the contractor. Not all of it grew in, and the parts that did were subject to the trials and tribulations of being young grass blades in a high kid, dog, and cat traffic area. Every year I put seed down, and it gets trampled or peed on by our neighborhood pack of dogs. Sod seemed like a waste of money, considering the luck I’d had with grass (and my general lack of watering skills). So when I decided to convert a bank of spotty grass next to our driveway to mulch, a solution presented itself. I’d simply move the grass from the bank to the yard, easy peasy right?

Partway through the conversion, I stopped to start salvaging the grass. See those yellow dead spots? That’s where it’s going. 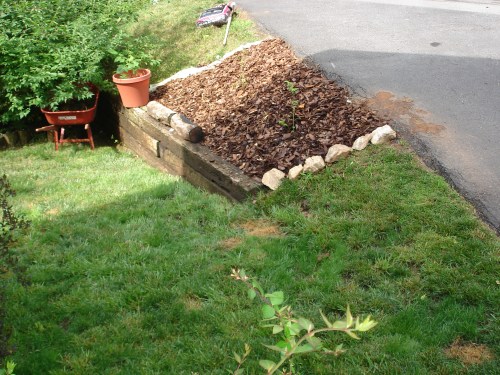 After a few failed attempts, I’ve learned a few things. By no means am I an expert on grass growing (clearly), so these are just steps that have worked for me.

First dig up the dead grass and create a shallow hole for a patch of new grass to sit in. You’ll want to leave it a little more shallow than you might think because it will probably sink in a bit over the next few days. 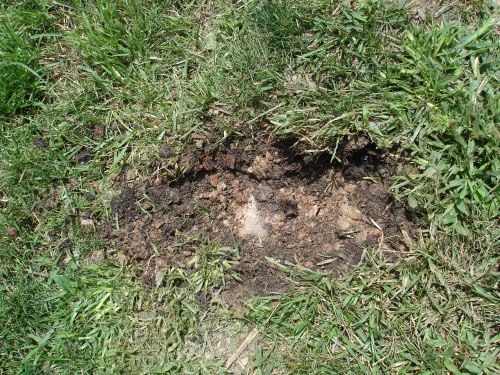 Next, dig up a few patches of grass from an inconspicuous area to use for plugs (in my case, the half mulched bank). 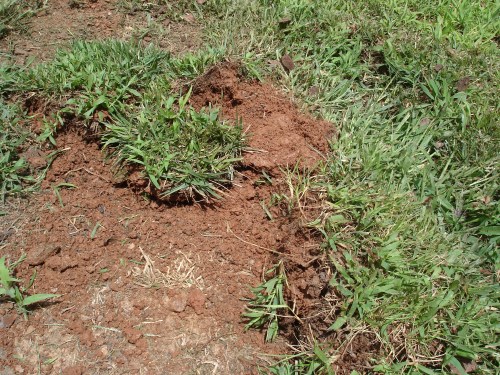 Now you’ll want to prep the grass for transplant. I’ve found the best way to do this is to grab it by the top and shake it out a bit. Basically you want to expose the roots and break up the soil around them. Depending on how much it has rained, it may just take a little shake or you may find yourself whacking head-full of grass on the ground. Just try not to break it up completely.

Fill your hole completely with water-I mean it, make a puddle! 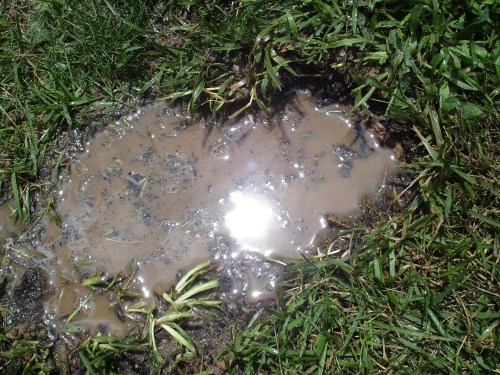 You can start filling in the hole with the plugs, avoiding temptation to overcrowd. You want to make sure the roots of your plugs have ample room to settle in. It’s a bit like a really muddy puzzle. 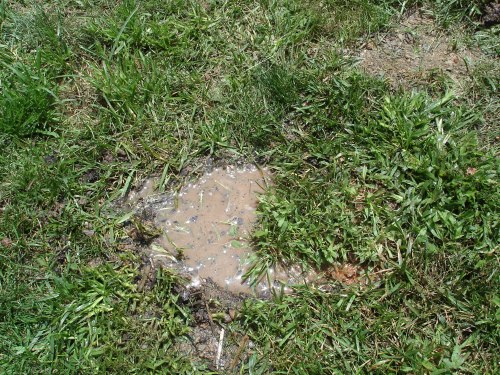 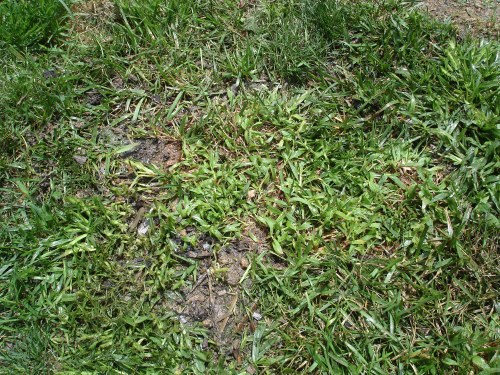 It will end up looking pretty filled in-not perfect, but that doesn’t matter- you’re going to need to throw seed down in the end anyway. This is just a way to get some green going on and help protect the future seedlings you plant in the fall.

As for the leftover grass on the bank…it’s not going to get a second chance at life unfortunately. But, by using a completely natural approach for the conversion, the soil will get a boost by the dead grass. A little gift from the afterlife, you might say.

First you’ll want to mow the grass, the shorter the better. Then gather up a bunch of thin cardboard and newspapers (try asking for these on Craigslist or your local Freecycle message board). Lay down the cardboard and follow with a good soaking. The cardboard should be completely soft before adding as many layers as you can of newspapers. Give it another good soaking, then top with a thick layer of mulch. It won’t take long for the grass to succumb to the lack of sunlight, and over time the cardboard and newspaper will break down and add nutrients to the soil.

As a result of all the transplanting, this year’s lawn is probably the best one to date. I’m eager to finish the bank with hedges and mulch, creating a low maintenance space. I’ll be sure to post pictures when it’s all done!