Oh yeah, just when you thought I couldn’t possibly ruffle anything else…it happened.

Now I love love love our BH&G comforter, but it just got to be too difficult to wash the king size monstrosity. It gets so dirty from our dog Millie sleeping on top. Apparently she has a drooling problem like her mommy…..I kid….well, not really… In any case, I’ve been thinking about getting a duvet cover for awhile now but haven’t come across something I loved for the right price. Having improved my seamstress abilities, I decided to try and make something myself. A duvet cover is just a giant pillow, right?

And when I say giant I mean it- our king size comforter would need something approaching 108″x115.”

I didn’t really want to shell out for two of them for the front and the back (plus, I thought it would be to thick), so I also bought a $15 cheapo king size sheet from Walmart. Our comforter is so large that the only place to work was on the bed itself. After I washed, dried, and ironed the drop cloth, I laid it over the comforter. I didn’t trim anything from the sides, but I trimmed about 2′ off the bottom. That left plenty of overhang to tuck under and tie with ribbon (or buttons or another method of closure).

Inspired by this bedding at Urban Outfitters… 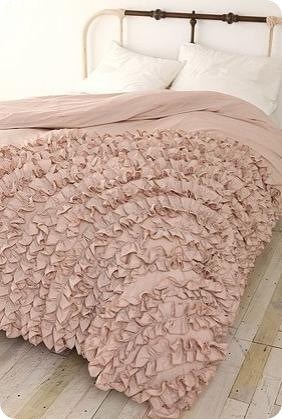 …I set out to create my own ruffled version. While I loved the asymmetrical nature of the original design, I really wanted the ruffles to be across the whole width. As for the fabric I used, it was 15 yards of a light drop cloth colored fabric I found at Walmart for $5 per bolt (each bolt being 5 yards). If they had more, I would have bought the whole stock. It looks great on the drop cloth and ruffled beautifully (which drop cloth does not). My ruffles are about 5-6″ wide (a 10-12″ piece folded in half and sew into a tube), with a loose stitch down the center. There are many different ways to ruffle, but I liked the look of this the best, and it was pretty easy. I wasn’t about to double ruffle 15 yards of fabric or anything, because that would be crazy. I’m already one ruffle away from being committed.

I will not lie to you and say this was an easy project. The ruffling took a lot of time (about an entire season of NCIS), then pinning took for.ever. Dragging the thing down the stairs to sew was even worse. No wait, the actual sewing was worse. But I’m nothing if not persistent when it comes to tackling ridiculously obscene amounts of drop cloth. After I sewed all the ruffles on, I dragged the whole thing back upstairs to lay it over the sheet and pin. I ended up sewing the top and both sides to the sheet while leaving the bottom open for a ribbon closure. Which I haven’t done…yet.

All the hard work and getting stabbed by pins totally paid off. I joked on Facebook that all my dreams had come true because when I went to sleep that night I draped myself in drop cloth. It’s sad, but true. It might as well be Belgian linen. You’ll notice there is a seam in the drop cloth (it’s two 6’x9’s sewn together)…I totally planned that to be right at the edge of the bed.

Ha! Who am I kidding, that was just a lucky break. I had intended to cover it with ruffles but ran out of fabric. If I can find more, I may fill in the ruffles. I do really like it how it is now though. The bottom of the cover just tucks under and is safety pinned until I feel like hemming it and attaching ribbons (bonus peek at the new floors, which I’ll share this week). That rug was $1 at Goodwill and is working out great until I can get a large area rug for the whole space.